WE now have an Arcade for your enjoyment, try your luck now.

Welcome to Leicester, Born and Raised.. Please login or sign up.

Medieval Leicester lay within the old Roman walls. The town walls followed the lines of what are now Soar Lane, Sanvey Gate, Church Gate, Gallowtree Gate, Horsefair Street and Bath Lane in the west. Four fortress-like gates provided the main entrances into the town known as North Gate, East Gate, South Gate and West Gate. The Roman town walls were maintained throughout the medieval period, it was not until the later 15th century that they began to be pulled down and the stone reused for other purposes.

Until about the 13th century, the layout of streets and property boundaries was heavily influenced by the surviving remains of Roman structures.  The medieval High Street, for example, respects the corner of the Roman forum, suggesting its walls were still visible. Other boundaries and medieval buildings appear to have used Roman walls as part of their construction.

posted in MEMORIES FROM NORMAN Written by Jules Jul 17, 2020, 07:08 pm 47 Views Rating: 0 (0 Rates)
MORE MEMORIES FROM NORMAN HASTINGS:
Merchant Navy circa 1944
The Galley was separated from the main bridge structure in which the Officers, the Captain and Chief Steward had their cabins. Also here was the catering staff mess room, main saloon, and pantry in which the food was served out, having been brought over from the Galley. Set in the floor of the pantry was a hatch and steps leading down into the storeroom.
Harry the Cook was now descending those steps to fetch up supplies for the next meal, but some idiot had put a small shelf over this hatch and on this shelf an even bigger idiot had placed an empty bottle. Harry was halfway down the stairs when the ship rolled sending the bottle crashing down upon Harry’s head. The first I knew of this was when crewmen ran past me, coming back a few moments later carrying Harry, as white as the proverbial sheet and with his head swathed in a blood-soaked towel. The Chief Steward was unable to stop the bleeding so the skipper was sent for! A signal was flashed to the Convoy Commodore who contacted the Destroyer escort, ‘Doctor urgently required!’ Within half an hour a Destroyer came alongside and lines were passed between the two ships. When I say alongside, don’t take me too literally as there was quite a space between us. Harry was carried onto the deck and lashed into what looked like a long straight jacket. Should the line snap whilst being passed over between the two ships he would float, head upright. Hooked on, the transfer started, and we held our breath as slowly, Harry was hauled from our ship to the Destroyer. Mission accomplished the lines were cast away and to the whoop, whoop, whoop of the Destroyer, our two ships separated.

A meeting place for the Guild of Corpus Christi


The Guildhall dates back to medieval times and would have been a building of importance during the time of Richard III. The Great Hall, built in 1390, was a meeting place for the Guild of Corpus Christi, a select group of influential businessmen and gentry founded in 1343. This Guild was the richest in the town and a powerful force in medieval Leicester. The emblem of the Guild, the Host and Chalice, is featured in 15th century painted glass window fragments in the Mayor’s Parlour. The Guild had their own altar in the Church of St Martin (now Leicester Cathedral) and used the Great Hall for banquets at times of high festivals. Originally the Great Hall had a beaten earth floor which would have been laid with rushes and heated by an open hearth, with smoke rising to the roof.  The Guildhall in its present form incorporates a later Tudor extension to the original Great Hall.

The Early Development of Council Houses in the City

In November 1918, the Prime Minister David Lloyd George stated that Britain should build 'homes fit for heroes'. Parliament decided to make local councils responsible for providing new housing.In 1919 Leicester City Corporation had 1,455 people needing a house and began building houses on the Coleman Road Estate in North Evington and the Tailby Estate in West Humberstone. By October 1924, 746 houses had been built on these estates.In 1924 building started on the Park Estate, now known as the Saffron Lane Estate. 1,000 houses made from concrete were built on the estate and 500 were built on the Braunstone Estate. They were called 'Boot' houses after the building company Henry Boot which built many council houses across the country. The concrete Boot houses were quicker to build than standard brick houses. They weren't cheaper to build to than standard houses, costing £465 per house compared to £395 for a brick house, but needed less skilled labour. There was a severe shortage of skilled labour to build the new council houses. During this time, it was estimated that only 140 construction workers out of a total of 4500 in the city were building council houses.In 1925 the Corporation brought the 1,200-acre Braunstone Estate. The plan was to build 1,200 houses on the site.  The estate was carefully planned in the Garden Suburb style; where there were wide streets with trees, open spaces and grass verges. The houses had gardens and were very light; bungalows were provided for elderly people. 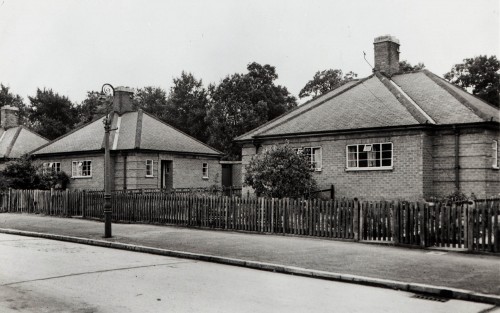 One of the early estates to be built was Braunstone. Seen here is Meadwell Road